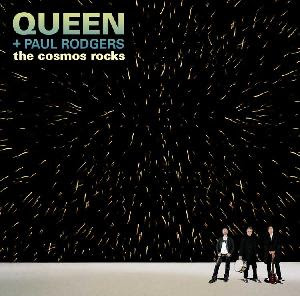 This is one of discs I picked out at the library. My first thought when getting this one was, "Yeah, I remember hearing some of this stuff from a movie I saw a while ago" (I had won tickets from a blog) I liked what I heard. My second thought of some the lukewarm reviews I've read on this album.

The naysayers say that original vocalist Freddie Mercury can't be replaced. I'll give them that. Freddie can't be replaced no matter what. I've heard covers of "Somebody to Love" and "Bohemian Rhapsody" and just cringe hearing someone else singing off key to these classics.

Bad Company's vocalist Paul Rodgers isn't by any means a Freddie Mercury. Not even close. It's like comparing apples to oranges. So why try? So I decided to take away the Freddy Mercury Factor and look at it from a different angle. The results surprised me!

My first initial thought was it sounds closer to Bad Company than it does to Queen. Yet, it does retain some of Queen's formula. Think of it as a blending of Queen and Bad Company! Queen Company if you want to call it...

This a diverse album covering a variety of sounds. Tunes like "Small" and "We Believe" reminds me of Bad Co.'s "Seagull" and Firm's "Live in Peace"-complete with killer acoustic guitar by Brian May. "Call Me" reminds me of "Crazy Little Thing Called Love" "Still Burnin'" has got some great harmonics. "C-Lebrity", written by drummer Roger Taylor is a surefire hit. The biggest surprise was "Voodoo" , a blues number. I don't think I ever heard Brain May play the blues before. He pulls it off quite well!

Paul's voice is sharp and soulful as ever. He doesn't sound like he's aged at all! Brian's guitar is more prevalent on this album that many other ones I've heard. It's more free flowing and the solos are a little longer. Rodger drums are sharp as ever!

If you are a Queen and/or Bad Company fan, I recommend getting this album. It may not be as great of a classic album as say, A Night at the Opera or Bad Company's debut, but it sure hold it's own. Just remember, just keep Freddie Mercury out of it.

Posted by drewzepmeister at 8:17 PM

I thought the Queen/Paul Rodgers combo worked very well because Roger & Brian didn't attempt to replace Freddie... They invited an old friend to come in and put his own stamp on the material.

Had they brought in a vocalist who sounded like Freddie it would have failed miserably no matter how good that singer might have been.

Toto did the same thing when Jeff Porcaro passed away. They knew no one could replace Jeff and there are some great drummers out there who play in the same style as Jeff-- many of them cite him as an influence (Greg Bissonette comes to mind)... Instead they went with a well-established drummer with a style all his own to put his own stamp on the material-- Simon Phillips.

I am sorry you are wrong because even with Paul Rodgers singing with Queen they do not sound like Bad Company. I listened to that c.d. and no I have to disagree with you.

I will agree with you that it is a real good c.d.. I really like a lot of the songs on it. They did a real good job on this one. That is my thoughts about this.

Anonymous-the mellow parts of the album reminds me of the mellowed out Bad Company songs.

Actually I found this surprisingly good. They really go well together. I think I'll check out the album!

Go for it, MO! Like I was, you'll be surprised! It is a great album!