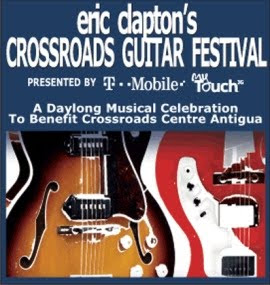 There is a concert out there that I'm stoked about going to. It's Eric Clapton's Third Annual Crossroads Guitar Festival. This year it is being held at Toyota Park in Chicago. That's a good two hour drive south from where I live. This year's line-up is incredible! The Allman Brothers Band, ZZ-Top, Robert Cray, Jeff Beck, Buddy Guy, Steve Winwood, Robert Randolph, and others! This all day event would start at 10:00 a.m. and ends in God knows what time. This should ought to be a killer concert!

The downside about going is the ticket prices start at $100. That is not including the fees, parking, and merchandise. It's a little steep for me, seeing I'm not used to paying for that much for tickets. It's a once in a lifetime event though. Another problem is who to go to the show with. My son is not too hip about going to a stadium sized concert featuring blues rockers. He's more into the heavy metal thing. Oh well, I'll figure that out later.

Here's a complete line up for the show:

Posted by drewzepmeister at 8:53 PM

A C-note is pretty steep, but with that lineup you really do get a lotta bang for your buck.
It's right here in my backyard. If i wasn't unemployed i'd consider going....

I would go at that price, hell I paid twice that for Dylan alone last year.

Jeff-That's what I was thinking! Hopefully, you will find employment soon, so you can go!

Dan-I heard about that. Consider this-in 2004, Bob Dylan played at Carthage College in Kenosha, (if I remember correctly) for less than $20.