Time and time again, I get various keyboard and piano solos going through my head. Some of this stuff are really great! Here is a list of some of my favorite keyboard players. It's in all random order. 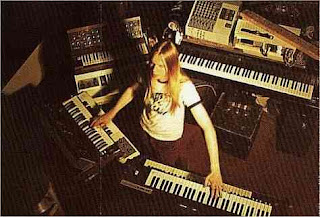 Rick Wakeman (Yes) This guys got a shitload of keyboards! This guy is responsible for bringing color and flavor to Yes. He is probably the most respected player in the business! Even though his "Six Wives of Henry VIII" is considered his masterpiece, his solo on "Close to the Edge" comes to my mind more often.

Keith Emerson (Emerson, Lake & Palmer) This guy is the master of keyboards! ELP is one of the few bands out there without a "true" guitar player, making his keys the lead instrument. How about that intro to "Karn Evil 9"?

Ray Manzarek (The Doors) This jazz influenced keyboardist provided the distinct sound for the Doors. I just love throwing the vinyl on during a thunderstorm and listen to that solo on "Riders on the Storm" climax! Awesome!

Rick Davies (Supertramp) Supertramp is a very unique band. Having two keybooardists, a sax player, bassist, and a drummer, this definately different from the rest. The triple assault on the ivorys on "Child of Vision" leaves my head swirling for days! 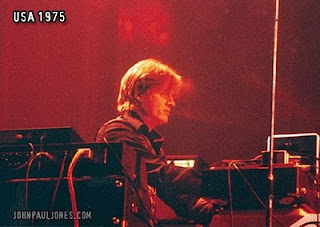 John Paul Jones (Led Zeppelin) Everybody knows about the prowless of Plant, Page and Bonzo. JPJ is often regonized as the goldfish of Zeppelin, What a shame! Even though tunes like "Trampled Under Foot" and "All My Love" are awesome, No Quarter is his masterpiece! The 1973 version on "The Song Remains the Same Movie" is excellent, but be sure to check out the super epic length versions from 1975 and 1977!

Jon Lord (Deep Purple) His kick ass, Hammond pushing organ solos blow my mind! Can anybody ever get enough of his solo on "Highway Star?"

Bobby Whitlock (Derek and the Dominoes) I could listen to the ending solo on "Layla" over and over. Brings back many memories...

I could go on and on about other keyboard players like Tony Carey from Rainbow, Roy Bitten's solo on "Thunder Road", Steve Winwood's work on "Well All Right", and Bruce Hornsby. This blog is taking me a bit long to write so feel free add on to what you like!
Posted by drewzepmeister at 8:54 PM

I have to agree particularly with Keith Emerson and Rich Davies.

Some others I've come to enjoy:

Geoffrey Downes - I love his work not only with Asia but on Yes's Drama album. While he's not as talented as Wakeman, there was a certain chemistry between he and Steve Howe that I didn't hear with Wakeman and Howe (Wakeman seemed to have a better chemistry with Jon Anderson than with Steve Howe).

Jordan Rudess - Dream Theater's current Julliard trained keyboardist. Rudess was at Julliard at age 9! He is a master at changing styles several times within the same song. Check out Dream Theater's instrumental track, Dance of Eternity from their Metropolis Pt. 2: Scenes From a Memory album for some of his best work. He also plays a 2nd "guitar" for DT by using guitar sounds on his keyboard to augment John Petrucci's lead guitar work.

Derek Sherinian - former keyboardist for Alice Cooper and Dream Theater and current keyboardist for Black Country (Glenn Hughes, Joe Bonamassa, and Jason Bonham being his bandmates). While I'm not really a fan of his work with Dream Theater, he's released some solo material since that I quite enjoy. He also knows how to pick the right musicians to fill out his sound. He's had Zakk Wylde, as well ex-Genesis guitarst Steve Hackett and session guitarist and Toto founder, Steve Lukather perform on his solo albums (to name but a few). He also has had Australian virtuoso drummer Virgil Donati backing him up.

Kevin Moore (ex-Dream Theater, OSI, Fates Warning) - While Moore has never been an official member of Fates Warning he's made substantial contributions to many of their albums including their critically acclaimed and highly regarded A Pleasant Shade of Grey. Moore is also the keyboardist/vocalist in OSI with Fates Warning's guitarist, Jim Matheos and Porcupine Tree's Gavin Harrison on drums. OSI has imho created a new sub-genre of heavy metal-- Ambient Progressive Metal (if that makes any sense).

Bill Champlin (ex-Chicago) - Admittedly this is a stretch as Champlin is more of an organist/B3 player. His work with Chicago isn't anything too special as they largely under-utilized him during his 28 year tenure with the band. To hear what he was capable of on the Hammond his solo work and his material with his original band, the Sons of Champlin is much more indicative of what a monster talent he was/is.

Perplexo-I agree with you on Geoffrey Downes. I really like his stuff Asia's debut album.