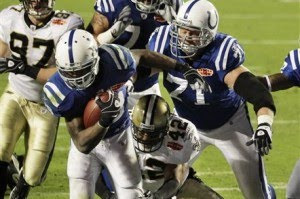 As I predicted, the New Orleans Saints won their first Super Bowl ever! They beat the Indianapolis Colts 31-i4 in this battle of greats. It sure was a good game! During the first quarter, I thought the Colts were going to take the game. From the second quarter on, it was the Saints' game. Quarterback, Drew Brees, threw a good game and won the MVP award.

This year's commercials were especially funny. It was delight to hear my son laugh at them. I really liked the Bud Light and the Doritos commercials. The Kiss/Dr.Pepper one gave me a big smile.

At halftime, The Who put out a decent show. Although they looked old, vocalist Roger Daltrey and guitarist Pete Townsend, moved gracefully. Pete Townsend did a few of his famous "windmills" (My son counted 28) I really liked the stage set up and I thought the lasers were so cool! They played abbreviated versions of "Pinball Wizard", "Baba O'Riley", "Who Are You", "Tommy, Can You Hear Me?", and "Won't Get Fooled Again." Not bad for a bunch old geezers...

What are your thoughts of the game?
Posted by drewzepmeister at 9:08 PM

I had the game on but only watched the ads, most of them were okay a few were good. I felt very embarrassed for The Who. I thought it was very mediocre and a sign that not everyone is capable of rocking into their old age. Roger's voice was weak and Pete seemed really slow. It saddened me.

Barbara, I admit you're right. It certainly was a far cry from their best performance. I figure this-a bunch of aging rockers playing in a highly commercialized forum. I didn't expect much to come out of this.

Oh, well I do agree with Barb about The who and Pete, they have lost their powers certainly, and the performance was quite a bit dull too for me . Wish I could go back to the previous years and watch the Who even just once really !

So happy for the Saints!! What a crazy couple of weeks it will be in New Orleans. Glad I don't live there :)

It's quite sad seeing all these rockers get older and older. But I thought it was still a pretty decent show!

I hear next year it's lookin' like the Eagles are up for halftime show, considering the Super Bowl will be in Dallas.

I have a newfound respect for Sean Payton after last night. That onside kick to start the 2nd half of the game was a really ballsy move! I think the Saints were suffering from a bit of nerves in the first quarter. I don't know what Payton said to them between the first and second quarters but they seemed to get their game back. He played the 2nd quarter smart. His time management was brilliant.

As for The Who, Daltrey's voice really isn't what it used to be but his vocals were better than in other recent performances I've heard, but that's not saying a lot. I have to concur with Barbara on this one.

Arjit-Don't feel so bad, I've never seen The Who in concert either. Wish I had! From some of boots that I have and the live albums that they have released, they do put out an incredible show!

Perplexo-I thought the Saints were brilliant in the second half!

Drew, I believe the Colts played an excellent first quarter, but the remaining 3 quarters were almost ALL SAINTS! Manning did get that 2nd TD pass I believe it was in the 3rd quarter, but that was about all she wrote.

I think Stover's missed field goal knocked what little momentum the Colts still had right out of them.