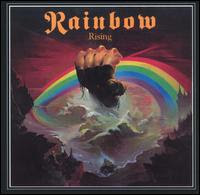 Little did they know, at the time, they had a supergroup on their hands! Rainbow's second album, released in 1976, displays the talents of guitarist Ritchie Blackmore from Deep Purple and Ronnie James Dio from Elf. (Dio later left to join Black Sabbath and form his own band, Dio) Blackmore also hired drummer great- Cozy Powell (Jeff Beck Group, Whitesnake, Black Sabbath), keyboard wizard- Tony Carey (Planet P Project, solo) and bassist Jimmy Bain (Dio) These guys were a force to to recognized! In my opinion, this is the best line-up for Rainbow.

Even though the first side of the album is great, the two epic length songs on the second side are album's heart. The first one, "Stargazer" recorded with the Munich Philharmonic Orchestra, is about a wizard forcing slaves to build a tower. This song has the most beautiful vocal work that I've heard from Dio. I could just imagine the wizard on the tower!

The other song is "A Light in the Black". This rythym heavy tune features some kick ass guitar/keyboard interplay. It's a tune that'll get your feet stomping! Anyways, it's not just another heavy metal album to ignore....

Posted by drewzepmeister at 7:50 PM

A high school buddy of mine put this album on one side of a cassette for me back in 1984. I had all the Dio with Sabbath stuff and Rising just killed me when I first heard it. I thought that Rainbow was more of a pop band, little knowing what they were like in the 70s until I heard this LP. Your review is spot on.