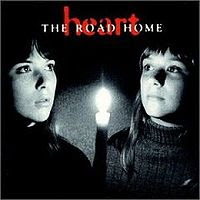 In 1995, Heart released a live album of all acoustic material. Recorded live in a Seattle club, this revamped line-up offers some very different versions of some of the the most popular Heart songs. Even though some of the mandatory Heart songs like "Dog and Butterfly", "These Dreams" and "Alone" and are there, the rockers like "Barracuda" and "Straight On" are given special treatment. "Crazy On You" was given a special twist to it! There are new songs in there as well, like the title track and " (Up On) Cherry Blossom Road"

One might think this is just another Heart album, think again! To me, it's the best work since their heyday in the '7o's. Even though vocalist Ann Wilson doesn't have the dynamic range she had back them, she can still belt out the vocals! Her younger sister Nancy, plays guitar good as ever pulling off a killer mandolin solo in "The Dream of the Archer" Original guitarist/keyboard Howard Leese still plays the leads with style. Newcomers bassist Fernando Saunders and drummer Denny Fongheiser fill the mold perfectly. And yes, this album was produced by the legendary Led Zeppelin bass player, John Paul Jones! (I think he may have played on a few tracks)

On a personal note, I'm a huge fan of Heart! I absolutely love their first five albums. I thought the next two-"Passionworks" and "Private Audition' were substandard. Even though some of the'8o's stuff was great, I felt is was a bit too commercialized. Yes, I saw Heart twice at Summerfest. The first time in 2007 and a second (a better and more memberable show) last summer.

Posted by drewzepmeister at 5:11 PM

Drew: Is this where I can find Heart's live version of Zep's "Battle of Evermore"? Heard it 1nce on radio a few yrs back & never again. Great stuff, tho.... -- TAD.

Sorry Tad, that song is not on this album. It can found on the http://en.wikipedia.org/wiki/Singles_(soundtrack)>Singles soundtrack under their side band name The Lovemongers. You can hear it again here.

I messed up on the first hyperlink-click here and you'll get it. Whoops!

Drew: Many thanx.
PS -- I've started reading Neal Peart's ROADSHOW, about touring the U.S. by motorcycle during Rush's 30th Anniversary Tour -- U talked about another of Neal's books a few days back, I think. I've only got thru the intro, but it's very funny & informative & I'm a sucker 4 travel writing NEway, so it should B great stuff. I'd let U know how it turns out, but U've probly already read it.... -- TAD.

No Tad, I haven't read that one yet. Still haven't finished the one I'm on.