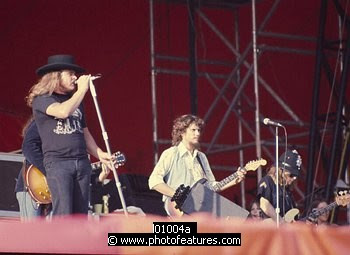 I absolutely love southern rock! Bands like the Allman Brothers, the Black Crowes, Molly Hatchet, .38 Special, Lynyrd Skynyrd, ZZ Top, Marshall Tucker Band, ahh..you get the idea, ROCK! I don't what is, but the blues boogie with hard driven guitar solos really get me going!

Well, this bootleg is no exception! Recorded live in 1976, during the height of their career. The good ol' boys from the south pull off a blistering show from the get go and never let up! They start the show with "Working for the MCA" and plow non-stop through songs like "I Ain't the One", "Saturday Night Special", "Gimme Three Steps" and course, FREEBIRD! The triple axe guitar threat of Allen Collins, Gary Rossington, and newcomer Steve Gaines provided a deadlt assault on the senses! Mad hatter Leon Wilkeson got down with a thunderous bass. Keeping excellent rythym, Artimus Pyle pounded away on the skins. Billy Powell just slayed with his piano. The late and great bare footed singer Ronnie Van Zant provided the voice of the south.

Unfortunately, this line up wouldn't last. On Thursday, October 20, 1977, just three days after the release of Street Survivors and five shows into their most successful headlining tour to date, Lynyrd Skynyrd's chartered plane ran out of fuel near the end of their flight from Greenville, South_Carolina, where they had just performed at the Greenville Memorial Auditorium to Louisiana State University in Baton Rouge, Louisiana. Though the pilots attempted an emergency landing on a small airstrip, the plane crashed in a forest in Gillsburg, Mississippi. Ronnie Van Zant, Steve Gaines, Cassie Gaines, assistant road manager Dean Kilpatrick, pilot Walter McCreary and co-pilot William Gray were all killed on impact; the other bandmembers suffered serious injuries. The band dissolved shortly after.

The setlist as it appears on my tape:
Working for the MCA
I Ain't the One
Saturday Night Special
Searchin'
What's Your Name
Whiskey Rock-a-Roller
Travellin' Man
Gimme Three Steps
Gimme Back My Bullets
Cry for the Bad Man
Call Me the Breeze
T for Texas
Sweet Home Alabama
Freebird
Posted by drewzepmeister at 8:44 PM

I was devastated when I heard about the crash. The music they created were a sign of the times. I will never forget the first time I heard them. Out on a date with the volume blasting Simple Man. It was who I wanted to be. Thanks for sharing.