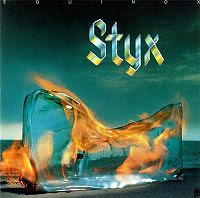 One may argue about Styx's finest moment. Even though their heyday was in the early '80's, I prefer their stuff from the '70's. This album here was the turning point for the band. This album marks the the first one they did for A&M Records, breaking away from the indie label, Wooden Nickel. Also this album marks the last with founding guitarist, John Cululewski. Tommy Shaw replaced him in time for tour.

Being the turning point, this album was more polished down and better produced than the previous four. And more progressive too. So band sounded more eager to explore and found a way to capture a wider audience. This was their break through they needed.

My highlights of the album were the catchy "Lorilei", a great song that you can sing about girlfriend. Great harmonics in there from vocalist Dennis DeYoung and the rest of the band. "Light Up"-wonder was that song about? That song would have made a great show opener. I love the bass riffs on "Born for Adventure" Kudos to bassist Chuck Panozzo! The heart of the album lies in their epic "Suite Madam Blue". Still today, that song remains a fan favorite.

Posted by drewzepmeister at 8:11 PM

Drew: I'm not the world's biggest Styx fan, but this album is 1 of my faves. I LOVE "Lorelei," with that whirling keyboard hook. "Mother Dear" is pretty great 2 -- not sure about the lyrics, but whatever. "Suite Madame Blue" is pretty good, but I think it's a little overdone ... & it always fools me when it comes on the radio. 4 some reason I always think it's either Yes's "Roundabout" or ELP's "From the Beginning."
NEway, U're right, these guys did some great stuff. I still love "Fooling Yourself," "Blue Collar Man," "Lights," "Why Me?" ... & "Come Sail Away" sounded pretty great the last time I heard it on the radio.... -- TAD.

Tad-the albums I really like from them are Equinox, Crystal Ball and The Gran Illusion.

Drew: I too prefer Styx seventies material over their eighties music. There's just the right mix of prog rock experimentalism and hard rock in their seventies material. Their eighties material was often either far too pompous or far too poppy. Their attempts at prog-rock in the 80s came across as pompous as I think that Dennis DeYoung had started to take himself far too seroiusly for his own good... And the rest of the band tried to off-set that pomposity by trying to take the band in a more hard-rock direction and I think they tended to over-compensate. It just didn't work well.

I'd say Equinox and The Grand Illusion are two of my favorites by Styx. The latter was the first Styx album I ever purchased.

Perplexo-I totally agree with your analogy of Styx! Pompous is the word I'd use to describe the later day Styx. I hated "Kilroy Was Here." "Mr.Roboto" made want to jam pencils in my ear!

Drew: I appreciated Kilroy Was Here for what Styx was TRYING to do with it. I think Styx had a great idea there...

However it was the execution of that idea that didn't end up working. Excellent idea - terrible execution = bad album.