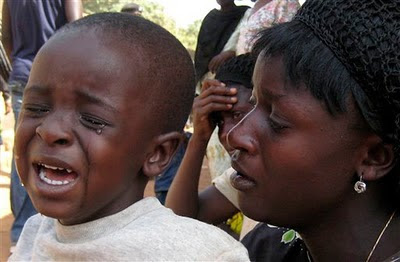 I just read an article that really got my blood boiling! It was about the slaughter of hundreds of Nigerians being massacred including babies and toddlers! Many of the chopped down with machetes! All in the name of what? Religion! It seems that the Muslims and the Christians have been going at since January. It keeps getting worse. It sickens me!

Here's an excerpt from the article I was reading that made my stomach churn:

An Associated Press reporter counted 61 corpses, 32 of them children, being buried in the mass grave in the village of Dogo Nahawa on Monday. Other victims would be buried elsewhere. At a local morgue the bodies of children, including a diaper-clad toddler, were tangled together. One appeared to have been scalped. Others had severed hands and feet.

WHY! I mean who's religion is better? Yours or mine? Who cares? Is that justification for killing innocent children? I don't think so!

My point being is if your are happy with your religion, that is fine with me. After all we are human beings living on the same planet. We all bleed the same color. I couldn't give a rat's ass to whom you pray for. I have my own religion, you have yours. I'd be happy to listen to your point of view, if your are willing to listen to mine.

Speaking of religion, one of my favorite authors, Christopher Moore, has at times claimed to be either atheist/agnostic or Buddhist. He wrote a rather irreverent humorous take on the Bible called Lamb: The Gospel According to Christ's Childhood Pal, Biff. At one signing of his that I went to he talked about how he went to the Holy Land to research for the book he said something to the effect of what religion over there amounts to is a bunch of people fighting over who has the better imaginary friend or whose take on that same imaginary friend is the right one.

Not saying I necessarily agree or disagree with that take but I do believe actions speak far louder than words and living by example is usually the best testament to one's beliefs... Going around picking fights with people who you don't agree with or who don't agree with you generally isn't the best way to win them over or convince them your way of thinking is right and theirs is wrong.

I agree with your philosophy there! To me, if your happy, I'm happy...

What's truly bizarre is that every religion has so damn many loopholes that it gets interpreted to one's own desire. Because of that, it gets difficult to determine from what right and wrong. That's when one's own moral judgment should come in...