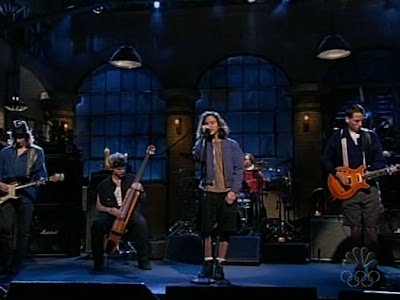 It's been awhile since I have written about a bootleg...So here goes.

Pearl Jam is one of the most explosive and intense bands to hear live to concert. Their energy and raw power is unparalleled except by a few bands. They are known to improvise their songs, often changing lyrics. To top it all, no one really knows what they are going play from night to night. They also change their set lists nightly. To see them in concert ought to be great!

This bootlegged show I have is no exception. I recorded this live on a national radio broadcast. A deal here! The show starts off slowly with the baritone voice of Eddie Vedder soulfully building up in "Release" before the band kicks it to high gear with "Rearviewmirror". The next number was "Whipping" a track off then yet unreleased third album "Vitalogy". The band assaulted the audience sences with the classics like "Evenflow", "Alive", and "Animal" Micheal McCready literally wails on his guitar to "Why Go." I just could imagine bassist Jeff Ament just bouncing around on stage. Stone Gossard kept a great rhythm on his guitar through out the night. Towards the end of the show, the band played even more "unreleased' songs like "Better Man", "Satan's Bed" and "Sonic Reduser" Unfortunately, this one of that last shows to feature drummer David Abbruzzese, who left the band after the tour.

This is a far cry from the best show I've heard from Pearl Jam. Some of their live albums are very good. I recommend Verona, Italy 6/20/2000 and Live at the Gorge 05/06 if you can track them down.