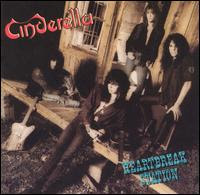 Back in the 8o's I was into a lot of heavy metal. There was literally hundreds of these bands out there at the time. Yet, I was picky about the bands that I got into. I did not like the glam metal, the death metal, the speed metal, the Zep clones, or any metal band that was too repetitious. I didn't like Poison, Warrant, Slayer, Kingdom Come, Winger, Twisted Sister, Megadeth, Kix, Trixter, etc. What did I like? I liked any metal band that thought outside of the box-lyrically and instrumentally. The ones that showed potential to grow and evolve. Cinderella was one of them.

Cinderella's debut album, "Night Songs" to me was nothing more than a glam rock act. Although a couple of tracks like "Shake Me" and the title cut were OK, I thought the rest of the album was junk. Their second album, "Long Cold Winter" really picked up my ears. That album marked the shift away from the glam rock scene into the blues. Gone were the usual lyrics about partying and loose bimbos. Gone were usual song structure that plagued the other metal acts. These guys were showing the signs of life! By the time their third album, "Heartbreak Station" came out they dropped the glam metal act completely and focused on creating new boundaries to grow upon.

This album sounded more bluesy and more Southern. Tommy Keifer's Joplin like vocals never sounded better. Gone were the coventional usuage of the guitar. The band pulled out the dobro, played the slide, and other instruments came into the scene like the piano and the sax. This band was growing! Tunes like "Shelter Me" you could dance to. "Heartbreak Station" was a ballad that didn't sound so wimpy and whiney. "The More Things Change" was was a pleaser.

Unfortunately, their forth album, "Still Climbing" was a couple of steps back. Due to the loss of interest in heavy metal and Tommy Keifer's vocal issues, the band faded into obscurity. They still tour and haven't released any new material for quite some time. One can only hope that they come with something new and interesting...

Posted by drewzepmeister at 8:57 PM