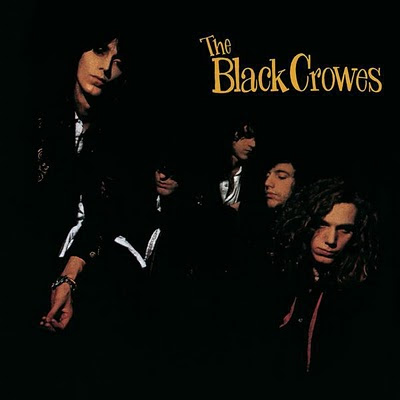 It was in the late '8o's. I was getting really bored with all leather clad and make-up wearing metal bands. Fed up with imagine consciousness of the MTV generation. Tired of plastic feeling of many of the artists in the '80's. I had a desire to sink my teeth into some REAL rock and roll! Along came one night on the David Letterman Show, I saw the Black Crowes.

Here's the band I was looking for! Rock and roll without the schlock! No make-up, no gimmicks and no frills! Just straight forward rock and roll! These guys sounded like purists from the '7o's-a time when rock sounded the best. They sounded like Led Zeppelin, The Faces, and the Stones all mixed up in a melting pot without sounding retro. It was all in that tune, "Jealous Again" that made me RUN to the record store and get this album! Since then, I've been a die hard follower.

As I listened to the album, the surprises kept coming! There wasn't a wasted note on the record. Recorded solely on analog equipment, the album retained that '70's feel. Singer Chris Robinson has got a voice that is a cross between Rod Stewart and Robert Plant. The guitar crunch of Rich Robinson and Jeff Cease blew me away, especially on tunes like "Stare it Cold" and "Hard to Handle" Drummer Steve Gorman, yes, he reminds me of the late and great John Bonham-hitting those drums heavy! Bassist Johnny Colt, well-he fits it the mold somewhere. Unfortunately, this line-up didn't last. Marc Ford replaced Jeff Cease for the following album. That was the beginning the revolving door of musicians that plagued the band till this day.

A few months later, I saw these guys in concert, opening up for Aerosmith. Seventh row center seats. Great show! Back then, NOBODY have seem to have heard of these guys. To top it all, they were filming the "Hard to Handle" video that very show!

Sorry, that I could not track that video down, but I hope everybody can settle for this one :)

Posted by drewzepmeister at 9:15 PM