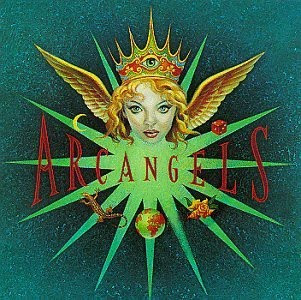 With all the talk recently about supergroups like Blind Faith and Them Crooked Vultures, I'd like to introduce an overlooked band, Arc Angels. Formed in early '90's out of Austin, Texas, this powerhouse blues band consists of lead guitarist/vocals, Doyle Bramhall II, guitarist/vocals Charlie Sexton, and the famed rhythm section from Stevie Ray Vaughan's Double Trouble-Tommy Shannon (bass) and Chris Layton (drums). A very impressive line up!

Originally, I when I first heard of these guys, I was thinking of some wild and crazy guitar work like the late and great SRV. This is not the case. These guys play straight forward powerhouse blues with catchy hooks. No frills, no gimmicks, just something that you hear at a bar. But better. Tunes like Shape I'm In and "Spanish Moon" has got my foot stomping. The ballad Sent By Angels is an excellent tune that you can dedicate to someone special to you. (It's my favorite track of the album) To Many Ways to Fall is killer rocker that really gets me going!

Unfortunately, this band broke up in 1993 due to Doyle Bramhall's heroin addiction. Since then, he has recovered and the band has been performed off on and on since 2002. Rumors have circulated that they officially reformed in 2009 (minus Tommy Shannon) and are working on a new album. Let's hope so!

Posted by drewzepmeister at 9:02 PM

Awesome band indeed Drew ! The band's line-up already made me so interested in their songs, and actually I loved this blues' band's tracks a lot, especially 'To Many Ways to Fall' was superb ! I wonder how I never knew of this band ! :)

Glad that you like them, Arjit! I think the band didn't get promoted as well as bands like Chickenfoot.

still work this Cd into my rotation from time to time. A keeper. Hope they put out a followup in '10

I hope so too, Mike!