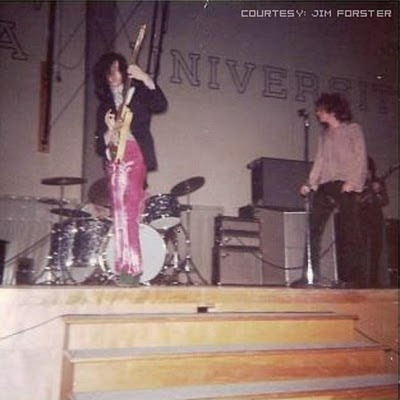 In my collection, I have over 50 bootlegged concerts from Led Zeppelin. I know that's a lot, but hearing Zeppelin live is always a treat. I don't think there are too many bands out their that can perform better than the mighty Zep.

This show is no exception. Performing live at the Gonzaga University in Spokane, Washington on 12/30/1968, Zeppelin left everybody including the headlining act, Vanilla Fudge, speechless. The heavy blues that they played was no match for the psychedelia that the Fudge played. The audience was stunned by Jimmy Page's crushing guitar riffs and the violin bow theatrics. Robert Plant's wailing voice was like no has heard of before. Not to mention the thunder of John Bonham's drums and the rhythm of bassist John Paul Jones. I just could imagine the look on the faces in the audience-all dazed and confused!

Led Zeppelin had arrived from England only five days before this show, embarking their first American tour. Backing up bands like Vanilla Fudge and Iron Butterfly, these guys were virtually unknown at this point. Their debut album would not released until January 12, 1969. It wasn't long before Zeppelin made a name for themselves.

This the earliest known bootleg from the band. The sound quality is rather muddied and hard to hear at spots. Overall it is not too bad (I've heard worse), considering how assessable bootlegging was in those days. It's always a treat to get ANY boots from that time period.

Here is a video clip from that show.

The setlist:
Train Kept a Rollin'
I Can't Quit You Babe
As Long as I Have You
includes-Fresh Garbage/Shake/Hush
Dazed and Confused
White Summer
How Many More Times
Pat's Delight (drum solo)
Posted by drewzepmeister at 5:38 PM

Your blog keeps getting better and better! Your older articles are not as good as newer ones you have a lot more creativity and originality now keep it up!

Thank you anonymous, for your words of encouragement! I appreciate it!

Oh my... I never have seen such an older performance of Led zep, way back to the 60s ! hmmm.... I just loved it seeing them perform so young ! And 50 concerts is A LOT Drew !! It surely shows that You might be the biggest fan of this Great Band ! :) Rock on !

It's been a while since i read it, but I remember tales of this tour from "Hammer of the gods." Travelling by car, and thinking they were going to die in a blizzard, etc...
I gotta read that book again.

RnRH-I've got a copy of the book as well. I was thinking about that tale when I writing this blog.