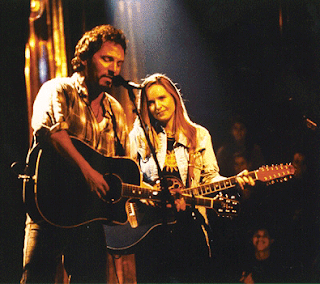 Back in the '90's, I used to record off from MTV's Unplugged quite often. I've always enjoyed the stripped down sound of musicians sitting on down on their bar stools playing acoustic guitars and singing away. I like the personal touch this scenario brings.

On March 21, 1995, MTV broadcasted this show recorded from the Brooklyn Academy of Music in New York. Melissa never sounded so radiant before!

I remember watching this show. I had my tape deck all hooked up to my TV and ready to go. Melissa appeared on stage by herself, alone with her guitar and a mic. I remember thinking wheres the rest of the band? She didn't need them. From the opening notes of "Come to my Window" to the final notes of "Like the Way I Do" proved to me that she could handle it on her own. Quite well, I may add. Her voice soared to sky and sent shivers down my spine on tunes like "Yes, I Am" and "I'm the Only One" Her guitar work impressed me on "Bring Me Some Water".

The highlight of this show was her introduction to "Thunder Road" (See video below). She made me and the audience feel up close and personal with her while she brought out a special guest-Bruce Springsteen!

Later that same summer, I saw Melissa Etheridge open up for the Eagles.

The setlist from this show as it appears on my tape.
Come to My Window
Ain't It Heavy
If I Wanted To
Bring Me Some Water
Maggie May
Yes I Am
Thunder Road
I'm the Only One
Like the Way I Do
Posted by drewzepmeister at 12:28 PM

Hey! I have been searching for this unplugged performance with M.E for so long. Especially the song "Like the way I do". And I was wondering if maybe you could post that song or send the clip of it on MSN or something like that? I would be eternally grateful.

Hi Candyshot! Welcome to my blog! After a fruitless search of YouTube, I could not find "Like the Way I Do" from this particular show. (My copy is on cassette) However, I found a good performance of this song live from the House of Blues in Atlantic City in NJ on 8/28/09 that you may enjoy. Here it is