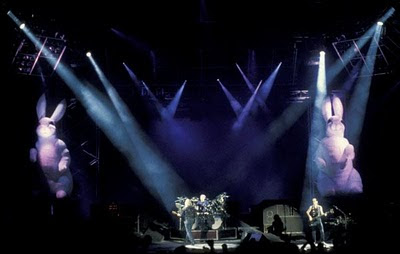 I've been reading a book I've recently purchased "Ghost Rider-Travels of the Healing Road" written by the drummer from Rush-Neil Peart. This has gotten me into a serious Rush mode lately. To let you all know, I' m a die hard Rush fan. Over the years, I collected all of their albums, gotten a dozen bootlegs, and seen them twice.

The second time I've seen them was at Alpine Valley Music Theater in East Troy, WI in 1990. Talk about an excellent show! This is one of my four bootlegs that I have been to! It's kind of refreshing to know that you THERE when you are hearing the recording!

Let's talk about it! I remember this concert well! I remember the 80's hair metal act Mr. Big opening up for them. I wasn't too amused about them for after all, I thought of them as just another one of those heavy metal poser acts. Spent my time in the beer tent during that show show talking to other Rush fans. I had a guy come up to me trying to sell me some mushrooms! I declined the offer by saying "For Rush? No way!" I so learned the reason why....

Rush opened with "Force Ten" from their Hold Your Fire album. "Freewill" came next. They delighted the masses with videos from "Distant Early Warning", "Marathon", and "Red Barchetta" on a HUGE screen in the back. For stage props, they had two humongous top hats that were placed each side of the stage. Eventually, some monster sized rabbits would rise up though the hats! As the band forged on, playing music from throughout their career, the usage of lasers began to increase. The laser light show was alone was worth the ticket price! Never before I saw so many lasers! They were projected from behind the stage, off of the buildings behind us and even down the aisles! Capping off the show, band members of Mr. Big jammed with Rush on their final number "In the Mood" What a show! Awesome! I was simply amazed!

While I share Neal Peart's interest in Ayn Rand and enjoy their lyrics and musicianship, I'm not crazy about Geddy Lee's voice. I can listen to Rush in small doses but after awhile his voice starts to grate on me a bit.

I feel similar about Dream Theater. Those cats are monster musicians. I'd argue that Mike Portnoy may be one of the few (if not the only) drummer out there who could match and possibly beat Neal Peart beat for beat in a drum-duel. But their lead singer, James LaBrie I can only really take in smaller doses.

Most of my favorite Rush are the instrumentals and the 20 minute long pieces. It totally amazes me on how three guys can create such complex music! If you like the instrumentals, their 1997 release, Hemispheres, is is a good place to go.

I remember smokin some grape bubblegum in the parking lot next to a uhaul truck with a living room set up on top. When Rush and the laser light show started overhead I had to sit down or I wood have fell down the hill.