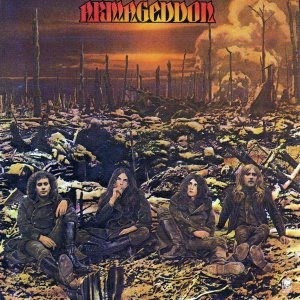 Here' s an album few people ever heard. That's a shame. It's a great record.

Former lead singer of the Yardbirds, Keith Reif, formed Armageddon out of Los Angeles in 1974. He recruited guitarist Martin Pugh and bassist Louis Cennamo both from Steamhammer and drummer Bobby Caldwell from Captain Beyond . Originally labeled as a supergroup, Armageddon was not promoted well. They only played two shows and released one album before Reif's death in 1976.

The album starts out with a bang in the hard rocking epic 'Buzzard". Some of you may heard the beautiful Silver Tightrope . "Paths and Planes and Future Gains" is a Zeppelin like rocker that will live you wanting for more! "Last Stand Before" has an ironic twist foreshadowing Reif's death. "Backing in the White of the Midnight Sun" is a killer progressive piece stretching for more than ten minutes in length.

If you haven't heard this album, check it out! You won't be sorry. Be fair to warn you, it's kind of hard to find.

Posted by drewzepmeister at 8:10 PM

Hey Drew, Really sorry I missed a lot of your posts, because I had a lotta exams upon my head, and had no time left for myself ! But, somehow I found some time to come over, and must say, You have shown me quite many newer albums and bands that I wasn't familiar with before ! Loved watching this Video ! I'll be looking up Youtube to find more too if I could :) Great post !