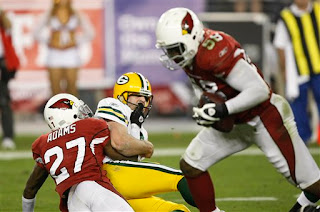 Damn! I was hoping to just cut and paste last week's game and say deja' vu. Well, that isn't gonna happen. The Packers lost the the Cards 51-45 in this shootout of a game. During the first half of the game, it appeared that the Cardinals were going to win this game. But never say never. The Packers exploded in the second half and tied the game up in the end. It was in the overtime that quarterback, Aaron Rodgers fumbled the ball and the Cardinals' Karlos Dansby recovered for a touchdown. SIGH! More on the game here.

It was a great game and an excellent season for the Packers. They did a lot better than anyone expected them to do. They finished the season with an 11-6 record. Let's hope they'll make it further next season.
Posted by drewzepmeister at 8:18 PM