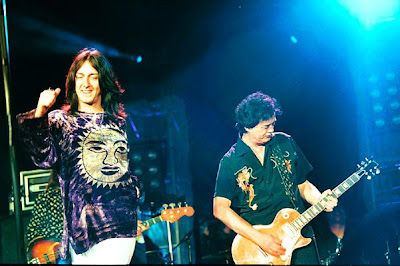 Recorded live the day AFTER I saw them at Summerfest! Wishing was this was the actual show that I saw. No matter, this is just as good as the one I saw. So. I'll just tell you my experience at the show I saw. It was very similar to the show that I have on tape.

Jimmy Page & the Black Crowes sure rocked the house that night, playing mostly obscure Zep tunes like "Hots On From Nowhere" and "Your Time is Gonna Come". They threw in some golden oldies like "The Shape of Things" and "Oh Well" Yes, the Black Crowes tunes were not forgotten. Tunes like "She Talks to Angels" and "Remedy'" were played.

The band played solid in this almost three hour set. Jimmy Page played solos that were almost equal to the days of Zeppelin. Drummer Steve Gorman handled the drums to a point I almost thought John Bonham was playing. Guitarists Audley Freed (Cry of Love) and Rich Robinson held solid ground with their rhythm playing-matching to likes of Jimmy Page! Bassist Sven Pepien gave the bass a good thunder. Vocalist Chris Robinson-well, he never tried to go out of his way to sound like Robert Plant. Instead, he used he the usual southern drawl in his voice to sing in volumes. It was very interesting on how he did it. Almost like nostalgia-like a guy who is obsessed with listening those killer classic bands the Faces, the Rolling Stones, and Led Zeppelin.

I remember getting lit up that night, all stoked up about hearing Led Zeppelin! Gov't Mule opened up for JP & BC and they played a rockin' show. As soon as JP & BC were done, we ran to the middle of the park to see Blues Traveler! The next day, I came back to see the Allman Brothers. What a wild rock and roll weekend it was!

The setlist as it appears on my tapes

The Wanton Song
Misty Mountain Hop
Hots On From Nowhere
No Speak, No Slave
Sick Again
What Is and What Should Never Be
Gone
Oh Well
Ten Years Gone
In My Time of Dying
Your Time is Gonna Come
Remedy
The Lemon Song
In the Light
The Shape of Things
Nobodys Fault but Mine
Heartbreaker
Bring It on Home
She Talks to Angels
Out on the Tiles
Whole Lotta Love
Posted by drewzepmeister at 10:45 PM