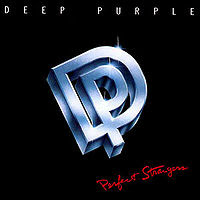 From moment when the opening organ drones that fades up into a monster of a song in this album's opener Knocking at Your Back Door, I knew this album was going to be classic! It's all there! From the Hammond pushing organ solo on Nobody's Home to the cosmic lyrics of the title track , this album rocks! My favorite part of this album is the third verse of "A Gypsy's Kiss" That always gets my fist pumped up in the air! In my opinion, this is the best album from Deep Purple since Machine Head.

Released in 1984, this album marks the return of the famous Mark 2 line-up. That is: Ian Gillian on the vocals, Ritchie Blackmore on the guitar, Jon Lord on the keys, Ian Paice on the skins, and Rodger Glover on the bass. This is the first that they played together since 1973!

I was fortunate to see them on this reunion tour at Alpine Valley. Man, was that concert LOUD! My ears were ringing with Gillian's screaming for hours after the show! Not to mention a killer laser light show!

Posted by drewzepmeister at 6:52 PM

I've got a friend who is a huge Deep Purple fan. I've asked him about his favorite era of the band and I could be wrong but I think it was this one.

I am curious though, what are your thoughts on the Tommy Bolin era of DP?

Tommy Bolin did one album with Deep Purple before his death called, Come Taste the Band. Its a good record, but considering the wealth of other Purple stuff, it's not one of my favorites.

Speaking of DP, did you hear that Glenn Hughes is going to be the lead singer in a new supergroup. The other members of the supergroup are still a mystery/secret, but the rumors of Hughes potential bandmates include: Jimmy Page, Jason Bonham, David Coverdale, Joe Bonamasa, and Jordan Rudess to name a few.

Perplexo, I didn't know any of these things. Thanks for the info!

They will be called Black Country (named after the region in England where Glenn Hughes and Jason Bonham are from).

Now that's an album I really looking forward to hearing!