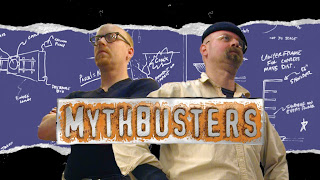 It's that time of the year that I spend more time indoors watching TV. Too damn cold to be outside. One show I've been watching often recently is MythBusters on the Discovery Channel. I find this show to be entertaining and very informative. The shows creators Adam Savage and Jamie Hyneman takes internet rumors, Hollywood stunts, and popular myths and tests them with scientific methods. Here is where they can confirm if the rumor is "confirmed", "plausible" or "busted."

Backed up by a reliable cast of three, Grant Imahara, Kari Byron, and ToryBelleci, they would try to replicate experiments up to full scale. Using their expertise, they would use their knowledge of science and mechanics to create a scenireo. For dramatic puposes, many experiments often involve in fires, explosions, and vehicular crashes.

Here's what I learned on the show:

A pressured up hot water heater can shoot through a basement and out of a two story building.

A compact car doesn't necessary get as flat as a pancake when sandwiched between two semis colliding head on.

A dimpled car (although looks hideous) gets better mileage than a smooth car.

That's just a small sample of the experiments done in the program. Check out the show! You'll be thrilled to learn something!
Posted by drewzepmeister at 5:58 PM

I've seen that show listed and always wondered about it. I'll have to check it out!

Hi Linda! Haven't seen you here in awhile! Go ahead and check out MythBusters, I have a good feeling that you'll like it!